When my daughter came home from college this year in boyish clothes, she asked me to cut her hair.  Short.

I’ve been cutting hair since a high school friend taught me to shape his boxy flat top fade.  Taking the clippers to college, short-haired friends flourished and I started charging $4 a trim.  And I’ve been my sons’ garage barber since they had hair.

But this felt different.  She was beginning to look more like a boy, and wanted to go further.  She wanted the same style her brothers had: short with a wavy dollop pushed over the top.

So when she asked, I said no, I wasn’t ready.

When she told us she was gay a couple years ago, we reaffirmed our love and desire to be in relationship, then said, let’s go figure out what this means together.  (Hint to those about to come out – one very kind way is write a letter, email it, then call shortly afterward.  Since you’ll always remember their first reaction, giving them a few hours to prepare might serve everyone better in the long run)

But then, we cried.  Well, we were afraid, we denied, we hoped it was a phase, we felt alone.  We went through many phases of reaction and acceptance, some of which are written about elsewhere and have smoothed with the passage of time.  But of all the podcasts and books that helped us come to an openness and acceptance of her sexual orientation, none prepared us for the haircut.

The request came on the heels of months of conversation about gender, whether it’s binary – strictly man or woman – or more on a spectrum.  Some of these centered on the ongoing and important problem of how society views and treats women.  But other talks centered on how she felt so different from the maquillaged, skirted girls on campus and that getting noticed seemed to depend on how feminine her clothes were. 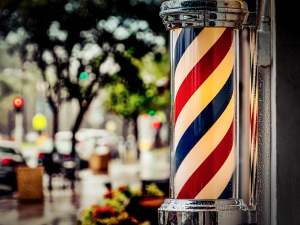 We called to mind other women we loved who had very short hair and a glowing beauty. These never seemed to be a statement about gender, but more about practicality or style.  Why did this feel so different?

She ended up paying a barber to cut her hair.  I agreed it was a better idea as my practical side couldn’t overcome my emotional resistance.

And the summer went on.

She borrowed her brothers’ clothes all summer, and thrift store shopped for more.  Some mornings I felt the emotional swirl as I looked across the breakfast table at, apparently, my three sons – her and her two brothers.  A few times I was complicit in the very societal norms she protested, complimenting her when she dressed more feminine – more like “my daughter” – and saying little when she didn’t.

Friends whose kids have gone the further step of trading out male or female pronouns for the non-binary “they”, have shared this inexplicable lump in the throat.  +1 if the child has changed their birth name to better reflect gender identity.

I’ve had to learn to see the first word of my daughter.  To acknowledge there is much of me in my expectations for her.  Sometimes another person’s face is the best mirror.

When a child finds a new name that represents them better, it can initially feel like a rejection of much more than the parent’s naming abilities.  Maybe it means they don’t want to turn out anything like us or our hopes for them.  Self-centered as we all are, it’s hard to see that it has nothing to do with us, and everything to do with their interactions with the world around them, about being authentic and true to their self-perceived identity.

And then there is the loss.  We’d already grieved (dramatic as it sounds, there is no better word for it) our hidden hope of an eventual son-in-law.  I say hidden because we weren’t the type to make a big deal over prince charming, but the moment it was gone, we realized it was there.  We became ok with, even hopeful for, her future adventures in love with the person of her dreams, whoever that might be.  But somehow there was more loss (for us) as she turned the wrenches on the bolts of her identity and appearance.

But if there was loss for us, there seemed to be increasing peace for her, as her outside came to match her inside. (Integrity is defined as the state of being whole and undivided)

The summer was ending.

So when, as the summer ended, she again asked if I would trim her hair, I said yes. She watched carefully as I ran the clippers over each of her brothers, and once they’d rinsed and returned to the nearby Xbox, she sat on the stool.

Many times the certificates of change in our lives are stamped with tears.

She probably didn’t know it, but I gave her one of my finest haircuts through blurry eyes. Saying yes this time, the tears weren’t so much about the loss of “my daughter”, but about me being invited, and now willing, to be a part of my daughter’s new life.

She was going to make these changes with or without me.  Why give some other barber the privilege of participation in her journey to grow up and become herself?

Mixed in among the piles of hair on the floor that night were some of my own hang-ups about how people should look and act.

I proudly call her my daughter, but just as I’ve had to re-think the word daughter, I’ll have to keep releasing the word my.  Stepping back to appreciate, and every now and then participate in, who she is becoming.

If you think reading this might help the parent of an LGBTQ person you know, please forward and invite them to reach out to me.

You may also like my article, Paying Attention : “I’ve been on a journey into a new world of people and thinking, a group that I previously thought of as “others”.”

The Haircut was published at P.S. I Love You, a Medium Publication, November 9, 2018

8 Replies to “The Haircut”