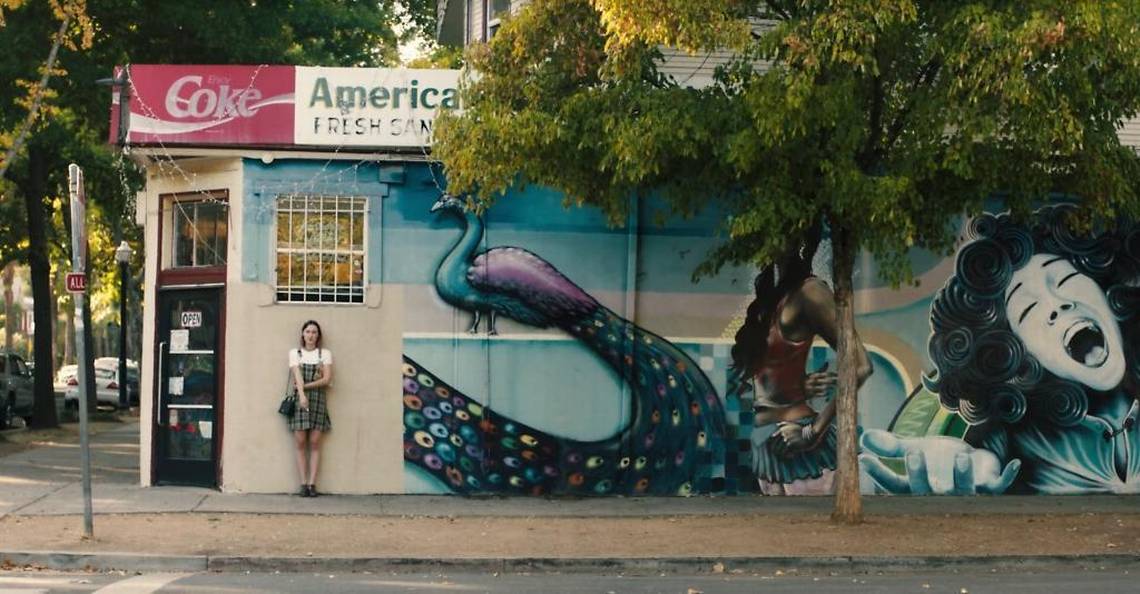 The film Lady Bird transported me to places familiar:  to high school, to trying to fit in and longing to get out. To shutting your parents out while hoping they would stay in.  To driving nowhere, anywhere, just to fill the car speakers with the soundtrack of teenage friendships.   To shopping in thrift stores and being aware of wealthier friends. To the pew, the subtle flirting and suppressed giggling of religious settings (Lady Bird attends Catholic school).

Knowing Greta Gerwig wrote and directed this film made it required viewing.  She acted in two favorite movies of late:  Her spontaneous awkwardness from Frances Ha, crossed with earnest honesty from 20th Century Women. Both show up in this movie, even though her face doesn’t.  Instead, Saoirse Ronan inhabits the titular character borrowed from Gerwig’s diary of growing up in Sacramento.  Ronan says a lot with a little, and if you thought she was just being herself in the enrapturing Brooklyn, hearing her American angst and accent in Lady Bird will convince you otherwise. 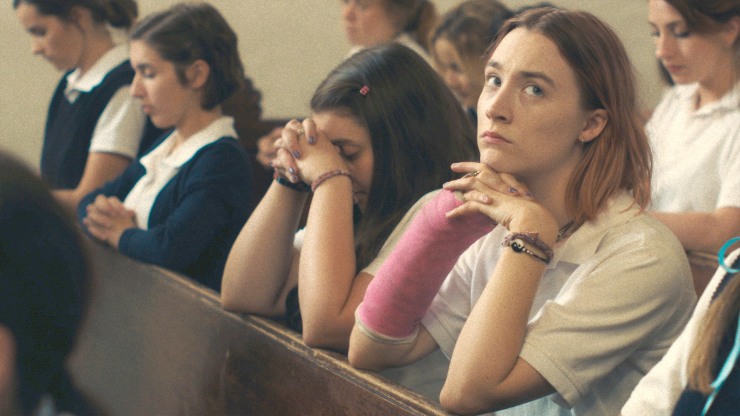 In real life, Gerwig was an unlikely enrollee at Catholic School, coming from a Universalist Unitarian background.  Her dedication to the sport of fencing meant she needed a private school that could work with her absences.  Terry Gross joked with her in a Fresh Air interview, that she may have been more open to the rituals of Catholicism than the Catholic kids.  “Since it wasn’t my background, I was allowed to love it,” Gerwig agrees, “And I didn’t … feel like it was something I had to define myself against.”

Hearing that it centered on a mother-daughter relationship could have pushed me away (not being a mother or a daughter), but the film is much broader.  Through some clever editing in the final scenes, Gerwig also explores those twilighted moments of youth, when a child first sees themselves in their parent.  In fact, Lady Bird’s given name in the film is Christine – after Gerwig’s real mother, and we see Lady Bird reject – and come to accept – this given name.

And this is accomplished by showing us characters who feel precisely the opposite: they do not know where each other are.

Thinking as a parent for a moment: we see kids supporting each other in ways parents don’t and wonder why it need be this way.  Young adults thinking old adults have no clue; and old adults proving them right.  For all the times a parent worries about peer pressure, we can also hand over our kids to those same peers by not being open, informed, un-controlling and reciprocal in our conversations with them.

Should a parent be able to say, “I’m terrified” to their kids?

Or maybe it is too much to be both friend and parent. Gerwig posits that “I’m terrified” is the driving force behind every argument of Lady Bird’s on-screen mother.  Should a parent be able to say, “I’m terrified” to their kids? I’ve known that feeling with each of my kids, and each time concluded that confiding this might only pour the terrified salt onto their already terrifying wound.

But this is where the larger cast comes into play, for teens and for Lady Bird.  She finds welcomed grace from a friend, a drama teacher (who is later replaced by the football coach in a hilarious sequence of chalkboard X and O stage blocking), and the nun who runs the school.  Sister Sarah Joan, in a welcomed departure from Catholic school stereotypes, laughs along with the pranks played on her and guides Lady Bird to second and third chances.   If kids were raised entirely by their home life we might actually be justified in our parental worries – but this is not the case.  Sometimes a supporting character plays just the bit part we need to move our story along.

Art helps us see ourselves and Greta Gerwig is a multi-talented artist. Through Lady Bird, she helps us remember and move forward at the same time.

♦weekendswell♦  Get notified by email of new posts by clicking “follow”.

All of the Greta Gerwig quotes here are taken from her interview on Fresh Air published Nov 16, 2017 – listen to the entire interview.  My favorite moment actually has nothing to do with the movie – but when she turns the question of sexual harassment back on the interviewer, and ever so honestly says she’s here to talk about her work. 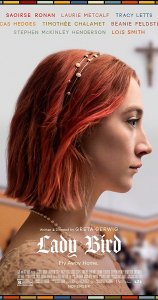 More about the film:

update: Lady Bird now has the honor of breaking the Rotten Tomatoes record: After 173 critic reviews, still 100% of them recommend it. Read more

One Reply to “Lady Bird”