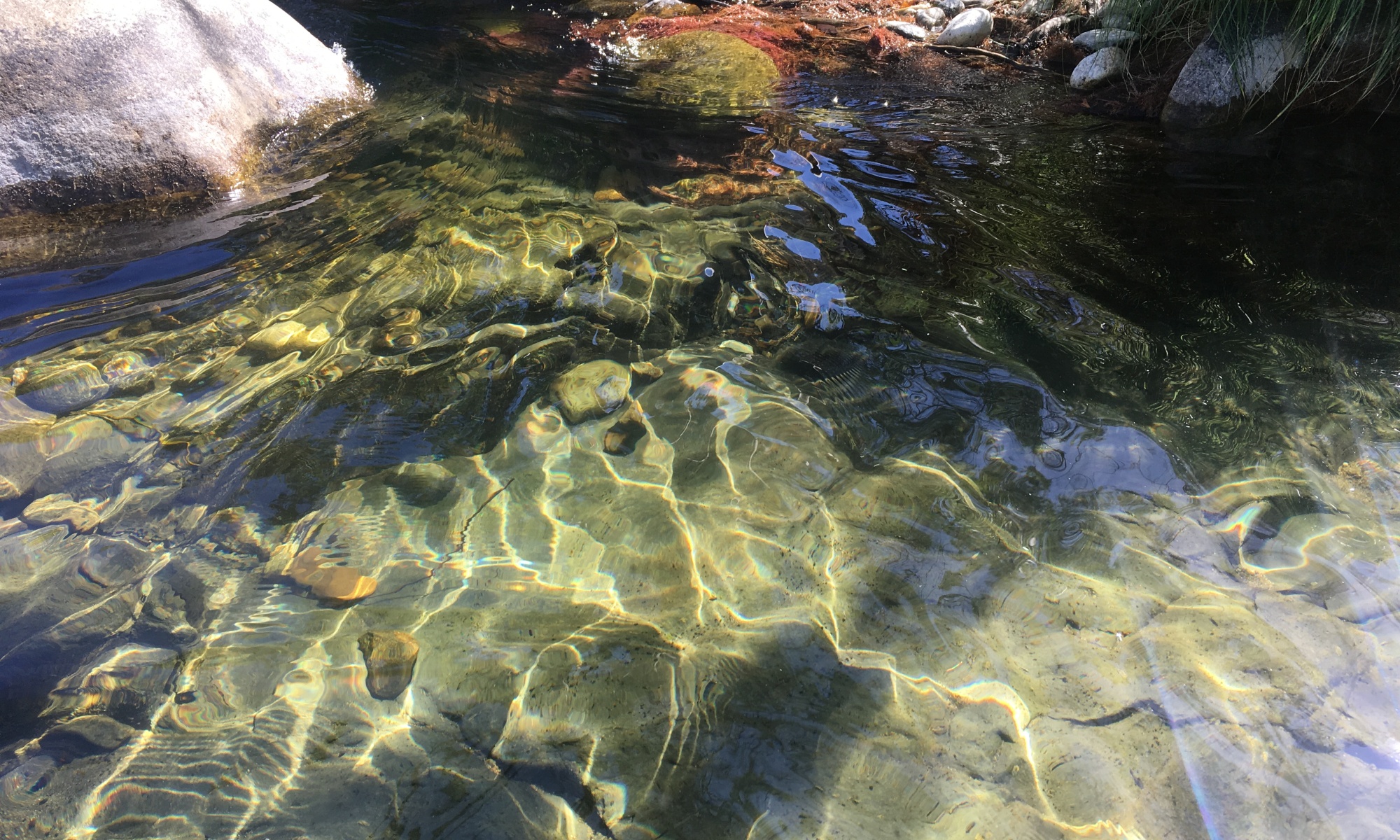 Back from vacation, with my brain as slow as a lime in an oceanside cerveza.  Only now can I see how much my mind works overtime.  Like the 405 freeway every brain lane is full, with thoughts honking and swerving to pass each other, overloading themselves to get into that carpool lane and move.

But now, clear air.  Wide open country lanes are few but free, ideas fueling the engine to get things in motion.

The freedom comes NOT from multi-multi-multi-tasking, not from getting it all done so that it would be all done.

Instead: slowing it down to single-tasking, and for a time, zero-tasking, first by simply turning off my phone and locking it with the passports in the hotel room safe.  Setting an autoreply everywhere to let people know what (not) to expect.  Bringing my loved ones with me so I can’t anticipate that emergency call.  Shortening the reading list to fiction and the watching list to World Cup: in the open air lounge with dozens of Mexico fans.

Turning it off and now I’m here, in just one place.

Moving around the hotel, restaurant, pool, beach, and later that week to a cabin on a summer-cool creek:  we couldn’t coordinate anything.  No “on my way” texts, no “find my friends”, and certainly no appointments.  Most of the time, there wasn’t even a clock to tell me I was hungry. Just be here.

When I didn’t know where everyone in the group was, FOMO – fear of missing out – had to settle into enjoying where I was with whoever I was with, and trust that the others were doing fine elsewhere.

And then, I looked up.

And I saw the sky.

The clouds were lazing about like a Damien Jurado song, wandering from morning to evening with no real plans to accomplish anything.  The breeze was warm, and I felt it warmly.  I smelled the sea and it smelled me (sorry, sea). 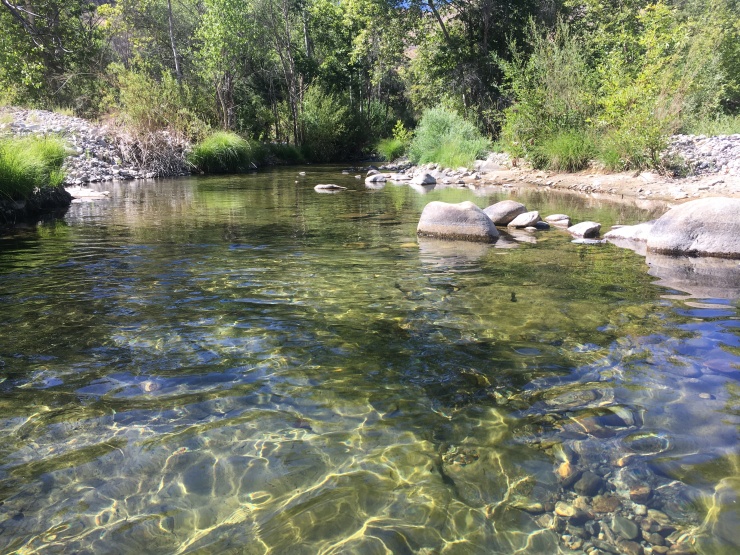 Later, at the river, we lounged in blown-up inner tubes, drink in holster, feet in water.  When it got hot, I dismounted (awkwardly) and sank into the moving part of the creek, wedging myself between two big rocks like a shower curtain rod finally getting its bathtub moment.  I decided to stay, and listen.  I thought of those cheap noise machines playing a wiretapped recording of the trickling water I was now surrounded by – and even creating.  The fullness of the river’s music washed over me, and I listened.

The red-tipped dragonfly on the overhanging branch got brave and flew onto the rubber tip of my river shoes.  She sunned herself there for a while.  I marveled at her helicopter cockpit eyes.  We looked at each other for maybe five minutes – 298 seconds longer than I would have looked at an Instagram picture of her.  And then a blue-winged suitor sidled up next to her and offered to buy her a drink.  She was having none of it — and hastily buzzed away. 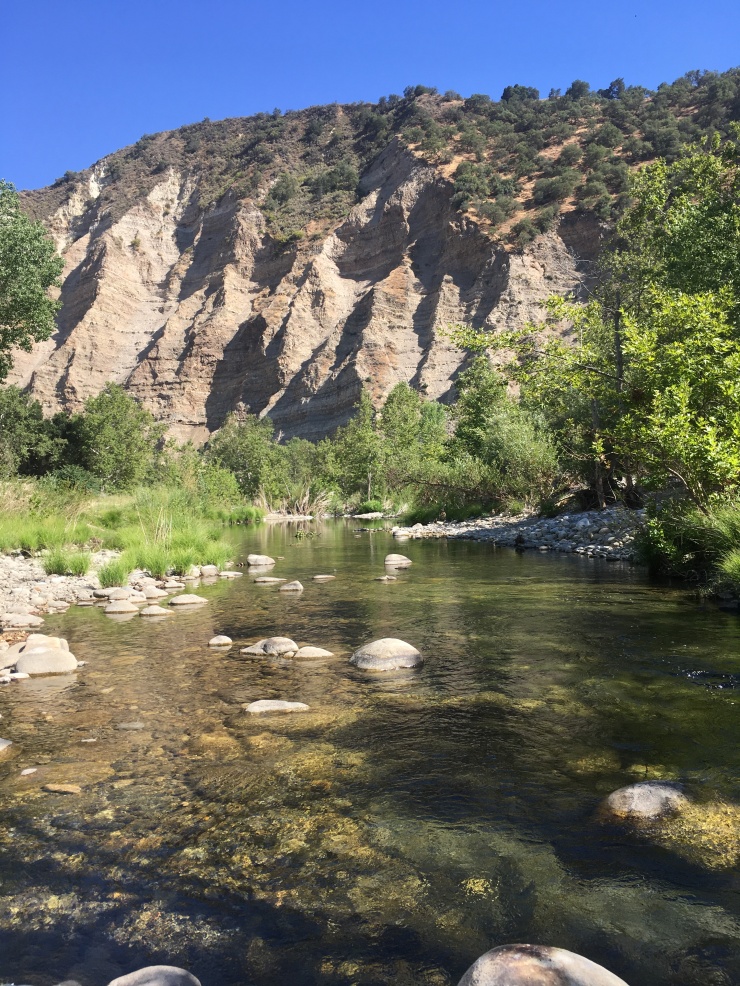 I thought about the past several years – how much had changed, and how after it all we were still ok.  The words of a wise friend to her husband (after more bad news) came back to me:  “We have each other. We have laughter. We have love.  And we’re going to be ok.”

I had spent so much energy trying to sort it all out – trying to understand how the world looked one way and now another, and whether it was me or my tribe, or maybe just my unnecessarily strong loyalty to my tribe.  It’s been like a storm I was trying to survive and explain at the same time.

And here I was after all that: breathing still, finding a cool spot in the water as a hot summer breeze swayed the trees above.

The water moves on.

And instead of straining the river for answers, I found myself letting go of questions, letting them float downstream for someone else to worry about.

You might also like The Hovering:  “Even in the depth of our darkness, there is a hovering over us, waiting for the time to be right for change”