In the grand scheme of things, I’d only just found you, but today was our day. At age 24, I could barely call myself a man as I woke up for the last time as a single person.  Just out of college, I’d had a trip to South America, a year-long city plunge in L.A., and a summer camp job bizarrely combining night security and children’s music.

I was finding myself, as they say.  I wanted to leave all my childhood, high school, and college-selves behind, and show the world who I really was. And you – you were the one thing I wanted to span that great divide – of who I was and who I would become.

You were outgoing, and confident.  As a college R.A. you suggested fun activities and the freshwomen in your dorm followed like ducklings behind the mother. You were every bit the beauty – your eyebrows opening your bright blues to the world, your plain white tee falling gracefully over your figure (figure is how you say it when you know your mom is reading).  You glided easily into crowds of guys, high fiving through intramural volleyball games and laid-back jokes from your San Clemente days. I wanted to know more of you. 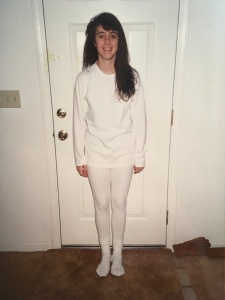 Without pretense, you gave grace to my fussiness – and made me feel less fussy.  When I visited your parents’ house and tried to make a good impression – making the bed, rinsing the tub after my shower – you laughed and said, “You wouldn’t want us to think you’re human, huh?”

Because I didn’t know I actually was.

My wheelhouse was doing the right thing and making sure others saw it. If others saw me as a good person then I must be one. Your grace to me embodied: who you are is who you are.  And you went all-in on that, or as your dad would say, “if you’re gonna shoot pool, shoot pool”.

I didn’t know then that the greatest gift we would give was showing ourselves honestly to one another.

Of course, we would swap those roles back and forth through the years – you vacuuming fervently before guests arriving while I sat on the couch and encouraged you to let them see who we really are instead.  My desire to jump the tracks of societal expectations and color outside the lines, while you went looking for the list of rules to follow.  But it gave me something to tease you about : )

From the beginning of our relationship, you were the human that my religion needed. Life would form our view of God as much as our view of God would form our life.  As if to make that clear, we were given (as all are) our own special obstacle course of reality, starting with our very early pregnancy.  Year after year, life reminded us we are not in control.  No amount of prayer stopped loved ones from dying, no amount of grieving gave us a pass on living.

Kids still needed feeding, organizing, and tickling. Goodnight Moon wasn’t going to read itself – until it did – and then the clubs and sports began.  Driving, coaching, and form-filling gave way to paying, waving and trusting.  As much as anything, raising our young adults taught us that who you are is who you are, and off they go toward another generation.

And through all that you made me laugh, and I you – sometimes unintentionally.  When we boarded the LAX shuttle bus with three tweens and way too much luggage, I was the last one on.  As the driver’s metal handle swung the door shut, my foot caught the stairwell and I tripped face-first onto the black rubber floor mat of the overcrowded bus. I sheepishly smiled, our kids’ shoulders shook out their silent giggles, and you burst out laughing, releasing the rest of the passengers to do the same.  The lady I landed next to turned and whispered in broken English, “You have nice family”.

And she was right, but I hope to God she meant something more:  you have a real family.  An honest family.  A human family.  And if that is true, then it will be because of you.  Because you are who you are.  And I am following you there, wherever it goes.

Who You Are was was honored as an Editor’s Choice story on P.S. I Love You, November 2018.